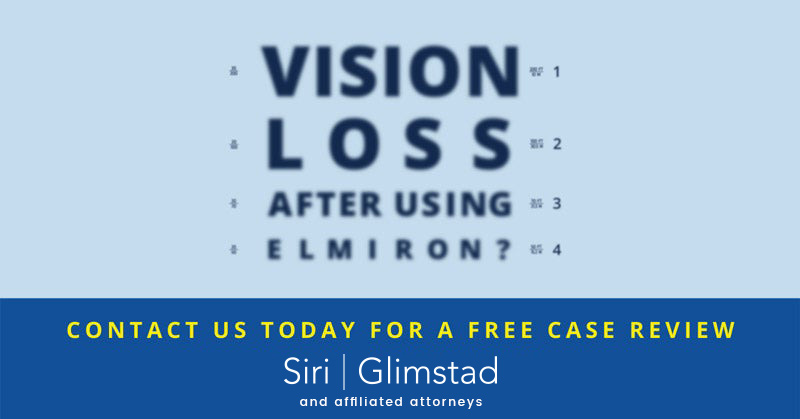 Siri & Glimstad and affiliated attorneys are evaluating claims from individuals who took Elmiron and were diagnosed with maculopathy.

About the Elmiron Eye Disease Lawsuit

Elmiron is a drug that has been prescribed to millions of patients since 1996 for interstitial cystitis (IC), otherwise known as painful bladder syndrome. Starting in 2015, researchers began to discover a potential link between the drug and a serious eye disease called maculopathy. However, even as the evidence has piled up, Elmiron’s manufacturer, Janssen Pharmaceutical, has failed to warn the public about these risks.

IC patients are typically prescribed 300 milligram daily doses of the drug. In more serious cases, doctors have been known to prescribe 800 or even 1500 milligrams. Millions of people are taking a drug that may one day rob them of their vision, and an untold number may have already suffered serious health consequences.

The potential risks associated with Elmiron were unknown until 2015, when doctors at Atlanta’s Emory Eye Center encountered an eye condition they hadn’t seen before in six women. This form of maculopathy didn’t seem to have a cause. Further investigation revealed that all six women had been taking Elmiron for years.

Studies released in 2018 and 2019 further support the link between Elmiron and maculopathy. It is as yet unknown how Elmiron causes this condition.

Despite mounting evidence, eye disease is still not listed as a possible side effect by the manufacturer. There’s no telling how many people have already suffered a serious eye injury due to their use of Elmiron, and hundreds of thousands of people are at risk.

If you or a loved one took Elmiron and were diagnosed with maculopathy, you could be owed compensation for medical costs, pain and suffering, lost wages, and other damages. We want to help you fight to get it.

Should I Stop Taking Elmiron?

Anyone taking this drug should talk to a healthcare professional about their options.

Who Is Eligible for an Elmiron Lawsuit?

If you took Elmiron and were diagnosed with maculopathy, you should consider taking legal action against the drug’s manufacturer. If you meet these criteria, you may have a case:

What Can I Recover from an Elmiron Lawsuit?

Every case is unique, but people who successfully file drug or medical device lawsuits can recover compensation for some or all of the following damages:

Contact us today at 440-381-0338, jmalainy@sirillp.com or fill out the form below for a free case consultation.

Attorney Advertising. The information on this website is for general informational and advertising purposes. No attorney-client relationship between reader and Siri & Glimstad is created by submitting the form above. Upon submitting the form, you agree that a representative from Siri & Glimstad may contact you. Copyright © 2021 Siri and Glimstad LLP (Main Office: 200 Park Avenue, Seventeenth Floor, New York, NY 10166: Phone: 212-532-1091) – All Rights Reserved

Attorney Advertising Disclaimer: The material on this web site has been prepared and is copyrighted by Siri & Glimstad LLP (“SG”). The material is for informational purposes only and does not constitute legal advice. The material is not guaranteed to be correct, complete, or up to date.  Information provided by or cited to third parties does not necessarily reflect the opinions of SG or any of its attorneys or clients.

Jurisdictions In Which Our Attorneys Are Licensed To Practice: SG has an office in New York. Members of the firm practice in federal district courts throughout the United States. SG attorneys are licensed to practice in the state(s) enumerated on their individual attorney profiles.

Disclaimer On Contract Formation: Your receipt of the information on this website is not intended to create, and receipt does not constitute, a contract for representation by SG. This information is not intended to substitute for obtaining legal advice from an attorney. No person should act or rely on any information in this site without seeking the advice of an attorney.   Also, please be aware that the sending of an e-mail message to SG does not contractually obligate SG to represent you as your attorney. SG cannot serve as your counsel in any matter unless you and our firm expressly agree, in writing, that we will serve as your attorney.

Statute Of Limitations Notice: You should be aware that the Statute of Limitations (the deadline imposed by law within which you may bring a lawsuit) may severely limit the time remaining for you to file any potential claims you may have.

This Is An Advertisement: This web site may be considered advertising in some jurisdictions under the applicable law and ethical rules. The determination of the need for legal services and the choice of a lawyer are extremely important decisions and should not be based solely upon advertisements or self-proclaimed expertise. No representation is made that the quality of the legal services to be performed is greater than the quality of legal services performed by other lawyers.

Independent Investigation: All potential clients are urged to make their own independent investigation and evaluation of any lawyer’s credentials and ability being considered, and not rely upon advertisements or self-proclaimed expertise. Our attorneys are not certified as specialists in any particular field of law.

Siri & Glimstad Does Not Offer Any Guarantees Of Case Results: Every legal matter is different. The outcome of each legal case depends upon many factors, including the facts of the case, and no attorney can guarantee a positive result in any case. Any testimonial or endorsement does not constitute a guarantee, warranty, or prediction regarding the outcome of your legal matter. Prior results do not guarantee a similar outcome.

Notice On Contingent Fees: SG represents clients in certain cases on a contingent fee basis. In such cases, no fee will be charged in the absence of recovery. However, in the event of an adverse verdict or decision, the contingent fee litigant may be responsible for court costs.

Image Notice: No persons pictured on this website are clients of SG.